This zoological park was established on November 29, 1921 to commemorate the arrival of the Prince of Wales to Lucknow. Its establishment was conceived by the then Governor Sir Harcourt Butler. The complex was established in the 18th century by Nawab Nasiruddin Haider, the then Nawab of Awadh as a mango orchard. At that time it was known as Banarasi Bagh. Even today, in the colloquial language, the locals call it Banarasi Bagh. In the evening by the Nawabs, as the evening of Awadh used to be famous, a Baradari was built to sit here, which is still situated in the middle of the zoological garden with all its grandeur and dignity. This Baradari has also seen the filming of many films. In this Baradari, the famous song of the film "Umrao Jaan", "In Aankhon Ki Masti" was filmed in this Baradari. Recently, a song from the film "Jan Nisar" was filmed in this. After the Nawabs, it remained a favorite place of the British even during the British rule, where the nobility used to spend their evenings. After this, the zoological park was established in 1921. From 1921 to 1926, 26 buildings were built in it. At that time it cost Rs 2,08,800. The main gate was constructed in 1936 and at that time it was named "Sir Ludovic Porter Gate". A committee was formed for its management and Commissioner, Lucknow was the chairman of this committee and "Sheikh Maqbool Hussain" was made the first secretary of this committee. In 1950, in place of the above committee, the Advisory Committee was formed under the Public Health Department. Director, Medicine and Health was made its administrator. In 1966, its administrative control was given to the Forest Department and the Advisory was reorganized and the Principal Secretary, Forest and Chief Wildlife Guardian was made the administrator of this advisory.

Balrail was run here on 14 November 1969 and this Balrail was launched by the then Chief Minister Shri Chandrabhanu Gupta and the station was named Chandrapuri Station. The Golden Jubilee of this zoological park was celebrated in the year 1971. In place of the old Balrail, the new Balrail and railway track was inaugurated in February 2014 by the then Chief Minister. The total length of the railway track at this time is 1.4 km. The area of ​​this entire zoological park is about 29 hectares. This 29 hectare has a total of 152 enclosures that do not include enclosures of the aquarium. The zoological park has a total of 1012 wildlife and 104 species of them. It does not include about 42 species of fish. The auditorium, nature learning center and butterfly park are other new attractions in this zoological park. In addition to wildlife enclosures, there are four main lawns for the children around the hammock park, boating pond and Baradari. There is a state-of-the-art well-equipped wild animal hospital for the treatment of wild animals, in which 04 veterinarians are employed. There are 07 toilets in the complex, drinking water facilities at 21 places including RO water coolers, 06 visitor sheds for visitors, battery operated cart and food court and canteen for children and elderly people.

This Zoological Garden has received three ISO certificates in April 2018. It is the only zoological park in the country to receive three Iso certificates simultaneously.

Zoological administration requests all the visitors not to bring any plastic material and food items inside the zoological park. Wild animals living in zoological gardens are ambassadors in your city in their respective communities living in forests. We all have the responsibility to keep them healthy. To protect all these wildlife from infection, do not tamper with them, do not let them eat anything and do not throw stones, plastic etc. in their enclosure. All people should not use any type of smoking gutkha etc. inside the premises. Throw garbage in the dustbin Plastic is very dangerous for wildlife. The plastic pouches you throw in the air fly into the enclosures. Wildlife ignorantly devours it. This plastic produces poison by reaching into the intestines of wildlife. This leads to unhealthy wildlife and may even result in death. Therefore, there is a humble request from all the spectators that plastic pouches, glass or any other material should not be used nor thrown inside the zoological complex

Map of the Zoo

Map of the zoo and you know where the animal related
services and more! 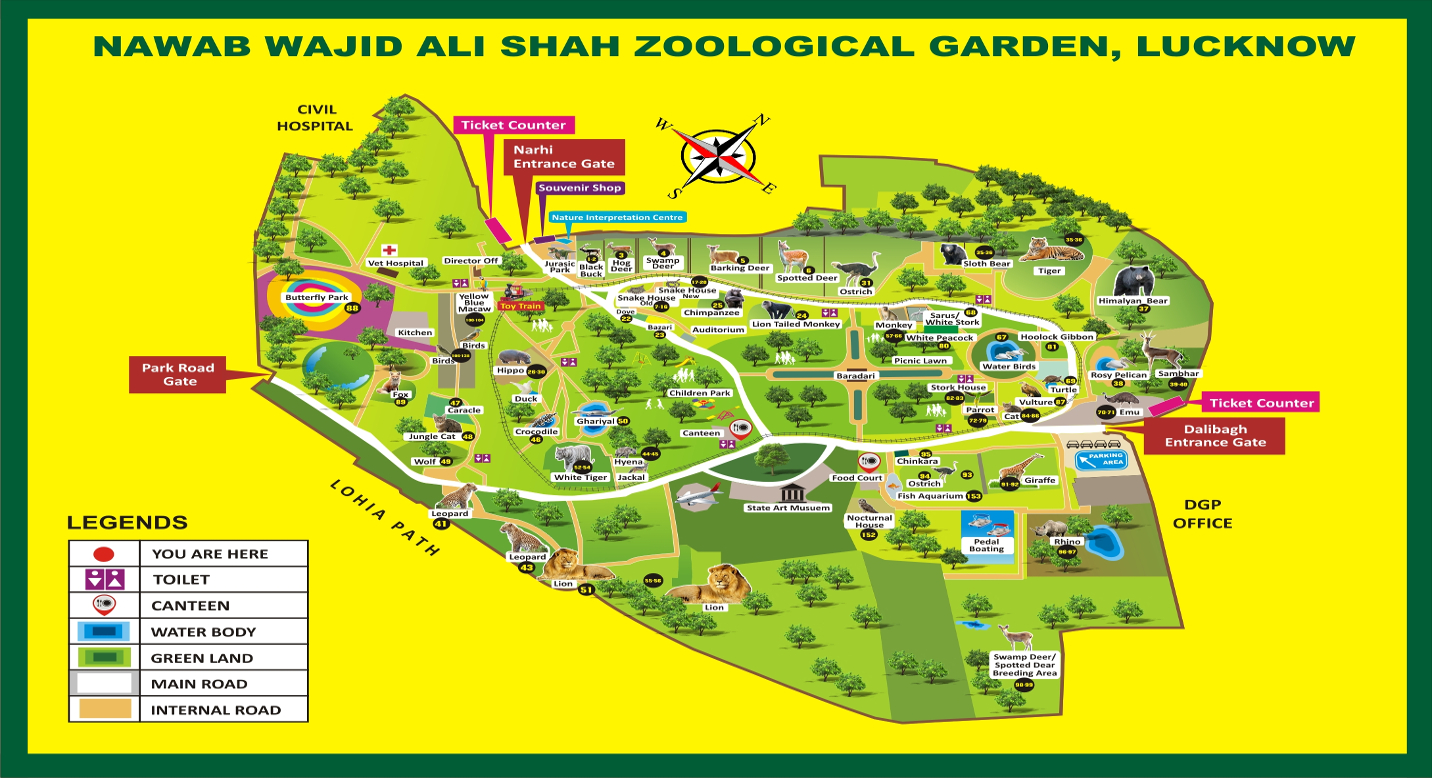 Tag your photos & videos with #zoo and share your Zoo experiences with our online community & tourists!